Too much monkey business

A New York Post cartoon suggesting that Washington's "inept" attempts to save the world from fiduciary catastrophe may not be up to much has caused a certain amount of disquiet at its perceived racist undertones. A swift apology followed from the Post, who nonetheless seemed a bit baffled by the vehement criticism of what they saw as a topical reference, implying that legislation intended to shore up the flailing economy of the U.S. might as well be written by an infinite number of monkeys with typewriters... 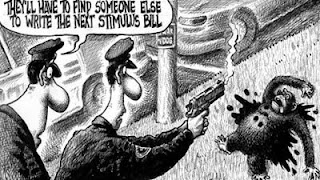 Looking at the cartoon, I am actually totally offended that someone could even think about comparing damn, dirty politicians to chimps.
I consider it a gross slur on the simian majesty of our banana-loving cousins.
according to... markwoff at 9:27 am