I preface this by noting that the inspiring article Oh no, not Steely Dan again [by which I mean suggestive rather than life-changing] from the Manchester Guardian's website [which, like the BBC's, is an example of an existing media node 'getting it so right, IMHO'] is almost completely objectionable in concept. That it is an 'edited extract' implies a number of scenarios, the principal one being me repeatedly swearing, banging on a table and using the words 'money', 'old' and 'rope' in quick succession, and subsidiary rants about there being no surprise that people are apparently queuing up to detonate themselves on mass transit devices when 'we' [the fair folk of the West] are so exercised by apparent patterns in our distractions. No wonder the planet's fucked - we're cortex deep in our own navels.

So having got that out of the way... well, if you're going to write, it has to be about something, obviously, and it's obviously sounding a note of pure writer envy that he's getting money for dilating on such matters when some of us have to engage in other industries to pay the rent... let us turn to digital music. A drunken conversation with sound engineers would tell you that digitising is the enemy of music, waves different, but I suggest you do your own research on that one, as I piss about with words and know little of such affairs. I flirt with techie stuff,but it's just flirting. I am, though, engaged in transferring a lot of my vinyl albums to the laptop for ease of making copies for friends, so I've become chums with WavePad to an extent... even I can see that 'Return of Django' loses masses of top and bottom, and the Arcola remix of Eric B & Rakim nearly killed my soundcard.

Music is often something that's 'going alongside' something else. I'm typing this with 'Live at Leeds' playing in the background on Winamp ['It really whips the Llama's ass,' they claim, and in the face of such blithely confident ungulate abuse, who am I to disagree? As Annie Lennox once almost observed], and while I'm digging it mightily [Substitute, one of the greatest things ever, has just started...] I wouldn't say I was listening to it, really: I'm writing this. [I am also one of those hapless fucks who can't pat their head and rub their stomach at the same time without getting fuddled.] You get the idea.

However, I don't have an mp3 player 'to go', and I don't have an iPod. A posh Walkman - I used to stride about happily listening to bootlegged gigs and copied albums [came to love Surfer Rosa/Come on pilgrim and Bossanova because they soundtracked a walk to work from the east end of Glasgow and back rather handily, for example,] but since I started cycling more I just fell out of the practice. You need to hear that lorry honking. Further, I suppose that I've become interested in the practice of investing a bit of ceremony in music - you know, listening to a record as an act in itself, rather than an accompaniment to a commute or blogging or whatever. If you habitually hear a tune when you're going to work, you will inevitably end up loathing it because of its Pavlovian associations. [Fact!] I hate James Blunt with a passion primarily because when I was once doing a month stint of temping in an almost brain-tamperingly nauseating big bank which shall remain nameless [Halibosis: Bad breath caused by bank-induced bile] , 'You're beautiful' was on the radio about five times a day, and the combination was almost brain-tamperingly nauseating. At the end of the video for 'wise men', he falls to the floor in a forest in flames, which suggests a philosophical canard along the lines of 'if James Blunt falls to the floor in a forest in flames, is it just Mark you can hear sniggering or are there others?'

Posh walkman though it may be, with trillion gig portability in a credit card sized device you can really shut the world off. There is something sinister about the iPod, from its Invasion of the Body Snatchers connoting name to the fact that it's another illustration of the people atomisation necessary in a capitalised society, and, further, an actual physical barrier/layer of insulation between people. Who is it for? Who needs 'up to a thousand albums' at their fingertips? Who even has a thousand albums? You don't like them all if you do. [Further fact!] It's an inducement to purchase more, or download if you're uninterested in copyright laws. There is a compelling argument that music should be live - our obsession with recording [writing included] stems from an attempt to frame emotions, to distil moments, to capture the intangible... why not enjoy the music of life, trains, people chattering, birds, wind in trees? Or, as Depeche Mode once actually noted: Enjoy the silence. ['Words are meaningless and forgettable' is my motto.]

That said, I have always sided with Bruce Springsteen's notion that 'We learned more from a three minute record, baby, than we ever learned in school,' if at a slightly cautious distance. I certainly never learned about the Dreikaiserbund from a three minute record, for example. Tunes are good though. But I had them before 'iTunes', and concerted attempts to homogenise, compartmentalise music into a mass of product, where James Blunt has parity with Count Basie, say - and he doesn't, even - are not just wrong to me but indicative of a wider malaise, as noted earlier.

In the article I cited, Steven Levy notes 'a spooky just-rightness, even brilliance, that comes from great song juxtapositions', from the shuffle function. Whaaaaat?! You get great song juxtapositions from selecting which records sit by each other and deliberately playing them in a certain order. That's why musicians sequence their albums in thought out ways [usually]. If you allow randomness into your life, just accept it, don't be disturbed by it. Levy is veering into some cod-profound half-arsed po-mo metaphysics [whatever that little selection of hyphenated signifiers means], and his upcoming book promises to be as exciting and successful as the book Freakonomics he mentions. That, by the way, was non-random sarcasm: Freakonomics was absolute dogshit.

If you live in fear of hearing the same artist more than once in a couple of hours, then write a book about it, you're probably unhinged, or possessed. Look at his name: the frequency of the letters 'e' and 'v' has to mean something evil, devilish. Anyway, it's exercised me long enough. Sunday! I turn to the traditional Observer and the News of the Screws, speaking of evil, and fuck me, page 6, there's Fraser Nelson guest-writing the political column. He was editor at the Glasgow Uni Guardian when I was there the first time [1994]. Now he's the political editor for The Spectator, and making a name for himself on Fleet Street, as they say in the industry [or used to before News International frogmarched the industry to Wapping]. Good luck, Fraze, but I fear you have supped of Satan's icy ejaculate now. On which further note of scarcely masked seething writerly resentment, I bid you a fond adieu, as I retreat into the correctly sequenced 'Eastern Sounds' ['Snafu', indeed!] and pour another coffee with a loud exhalation of happily untainted by diabolic spunk Sunday contentment.
according to... markwoff at 10:29 am 2 comments:

We were on the train back from Brighton the other week. It was packed with people returning to London after a day out and the like. Our day out had been nice. The weather was warm and sunny, perhaps the end of the summer [as I type this, thunder rumbles outside and the rain drums on the skylights very soothingly].

I had bought small jars of quince jam and tapenade from BBC employees moonlighting as artisan small jar fillers behind a market stall in Brighton town centre. Tasty fusion food was consumed, several ales were downed with girlfriend's sister, her bloke and their growing v fast child [well, not that fast - he stuck to the milk...]

Back on the train we're ankle deep in Sunday Papers, sharing them with fellow train-goers. Opposite me is this guy Brooks Buford - it says 'Brooks Buford - straight outta rehab' on his T-shirt, and not being an MTVEurope watcher I have no idea that he's a rapper/presenter/whatever... Kind of a post-Vice Eminem, yah?

I'm tickled by the fact that he has a tattoo of Ludwig Van on one arm and Van Gogh on the other [I'm wearing a pair of Vans as well, but mine are trainers.] He also has 'Epiphania' tattooed on a forefinger, possibly in tribute to Peter André, which you can see in the pic below. 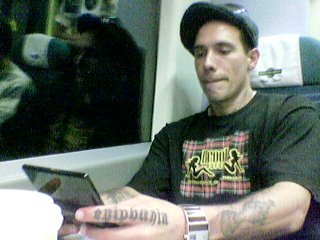 I noticed all this detail because as he was tooling about on his handheld gaming device, a new Nintendo DS, this younger looking guy who's standing up next to the doors leans over and says 'Are you playing Super Mario?' and the next thing I'm watching Vic... 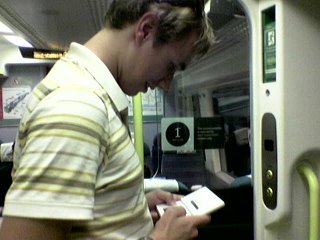 ...who is an Interactive Media Design student at Bournemouth Uni, trounce Brooks via Bluetooth. It's a transatlantic not face to face face off, and it's massively entertaining.

So Brooks gets whopped 2-0, then Vic had to get off the train with his nice girlfriend Vicki [also a student, at Bath]... He took time to point out to Brooks a gaming tip that if you grab the stars, you get further [although I could just be making that up in an attempt at establishing the hitherto elusive cultural significance analogy this little event suggested.]

Brooks seemed nice as well, and not nearly as surly as his web lair pics might suggest. He was affable in defeat - he just rolled with it. The quince jam is very tasty, by the way.
according to... markwoff at 1:43 pm 1 comment: