I was scurrying across town to attend to some optometrical business on my lunch just there - being a cubicle gopher has ruined my eyesight, official! - and up and down the escalators of the tube there were the usual little posters advertising shoes, finance, West End musicals, sexy underwear, etc. In fact in some of the more modish stations they have electronic screens, which sweep expensive looking graphics across the retina in a full spectrum dominant manner YOU CANNOT TURN AWAY FROM...

There were some examples from the recent Amnesty International campaign, where celebrities are photographed holding up signs saying 'Protect the Human'. 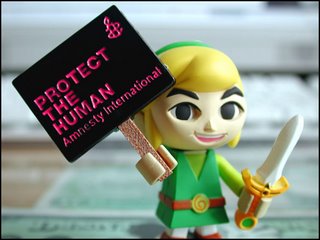 Human Rights be damned - I don't give Amnesty £6.00 a month to protect those shitehawks.

I discovered there's a monastery on my street this week. This is particularly entertaining given that the street is two rows of terraced houses in very residential south east London. But there they are at number 69 - the Franciscan Friars of the Immaculate Maria House "Our Lady Coredemptrix".

This revelation came about because there was, until last saturday morning, a huge metal filing cabinet inhabiting one of the cupboards in me and girlf's newly let flat. The landlord had arranged for it to be removed, the handyman who was supposed to be effecting this has a really advanced, almost mage-like concept of the term 'unhurried'... Anyway, eventually we said 'handyman' five times into the mirror and he appeared and the cabinet was duly moved... as far as the front garden.

It was a start. It sat there all day sunday, all day monday, and then on the third day, miraculously, it had gone. 'Good work handyman fella', I thought - erroneously as it turned out. For that very night there was a ring at the door and there was a bearded man in a long grey robe. I had just finished a leisurely second supper... sorry, I was drifting off into world of Tolkien there. But really though, it was a bearded man in a long grey cloak, fastened with a brooch, and he introduced himself by asking if we'd got the note about the filing cabinet.

Note..? Eventually finding the recycled envelope and scrabbling it open, I realised Fr George, who stood in front of me, had come to see if we minded that, as outlined in the neatly typed note, a group of monks from a few doors down had carted off the cabinet because they 'could use it.' I explained that it was the landlord's, and that he had purposes for it also. A slightly disconsolate Fr George departed into the night with a promise to return the furniture.

After he'd gone and I'd stopped giggling at the incongruity, I realised that I could do the Lord and the landlord's work in one - well, I was going to say 'fell swoop', but this would have to be more of a beatific swoop I suppose, in one go, anyway. I phoned the landlord and asked if he minded that the cabinet had been, ah, 'found' by some brothers in holy orders along the road, and he gave it all of two seconds' thought before saying 'Let them have it.' (Actually he said 'let them take it', which is an unfortunate qualifier as it does me out of at least a paragraph of comical retributional misunderstanding...)

So I scampered along to number 69 and had a nice chat with Fr George, during which I established that Fr could stand for Father or Friar, as he performs both functions, and also that he used to teach English before having a 'midlife crisis' - his words, imparted with a peculiar air of self-deprecation and self-awareness that here he was, a man in his fifties, running a monastery in a terraced house in Brockley, and, well, here he was - and that they were grateful for the now-legitimately-theirs filing cabinet.

In fact, he related, as soon as it had been placed in position in its new home, the drawers had ceased to open, which had caused some concern, on both a spiritual and practical level. 'Never mind,' I joshed glibly, 'it'll work fine now you know you're allowed it!' 'Oh, I know filing cabinets,' he rejoined seriously, 'and there was definitely something up here. But we have a brother who can work on it.'

So I went home with a head full of an appealing combination of tunes by The Chemical Brothers, images of men kneeling and praying over defunct office equipment, and the Keystone Cops scenario I had orginally wanted to enact before my conscience took over, of making them bring it all the way back down the street, right up to the door, and then telling them that actually they could keep it after all, watching them issue a weary sigh of acceptance before turning and trudging back, monks beneath the metal filing cabinet, cowls flapping, the sound of liturgical chants fading with their condensing breath into the cool night air.
according to... markwoff at 1:08 pm No comments:

[This is a week of consideration, no interweb and busy, busy work late.]

It was Bonfire Night in the UK: ‘Remember, remember the 5th of November, gunpowder treason and plot… I see no reason why gunpowder treason should ever be forgot…’ So we let off fireworks and perhaps burned effigies of Guido Fawkes, a terror suspect from the 17th century, but mainly doing the whole early autumn leaves and lumber rite, ooh, ah, wasn’t that a lovely rocket? - baked potato? Mmm, thank you, getting a bit nippy out isn’t it? kind of thing… except it was all ruined this year by the news that we had an enforced new effigy for the bonfires, as Saddam Hussein, the Arab bogeyman we managed to catch, was Sentenced To Death By Hanging…

The ghoulish insistence on reiterating the method at every opportunity [he’d asked to be shot by military firing squad, so maybe it was all a bit of knife twisting, metaphorical, that not only are you for it, Sadders, but there’ll be a short drop at the end of a rope and probable ex-dictator big white underpants soiling, not the swift chest bared and last cigarette number that would probably make a bitching mural for martyrdom…] seemed designed to emphasise a display of power, ours. ‘Don’t fuck with us, puppet leaders…’ This assertion of control is a bit feeble, it harks back to the original anti-anti-war argument, ‘Should we leave him in power, then, do you want that?’ which was rubbish then and is even more rubbish now “We” have removed him from power and Iraq is, by any criterion, totally even more fucked.

He did some reprehensible things as a leader, but this is unsurprising, given that that’s what people handed the big stick do [c.f. every head of any state ever, really, c.f. esp. our own Premier, T Blair, whose reminder of the ‘total and barbaric brutality’ of Hussein’s regime entirely overlooks the matter of the fact of his own part in being responsible, according to
which source you go to, of at least as much brutality against Iraqis – either in direct action or by proliferating a situation in which various factions have apparently free rein to run amok, to use the tabloid parlance - as Saddam Hussein was…]

The media coverage also seemed an attempt at finality, ‘closure’, e.g. the potted history the news channels were all running a version of, going from his entry to power, through our support, the now famous Rumsfeld handshake with ‘Our bastard’, as someone said about someone, Hussein’s whole shabby history as a chemical weapon lobbing despot – and where did he get those from again? - to the inevitable ‘strutting on the beaches of Kuwait’ cod-Hitlerian equating nonsense, [and if, by the way, anyone has a copy of a Thingy pamphlet from 2003 with that pic from the Sun that they talk about in that last link, I'd be grateful, etc...] through the first Gulf war exercise in half-arsed military showing off, the full sordid tale of this amplified gangster [we at the controls, turning him up to 11 then leaping back clutching our ears theatrically to the feedback and doing a pantomime search for the plug] to his closing court room denunciations, now ‘Defiant To The Last’ (© Everyone In The World, Nov 2006), as if he was actually removed from the court room and strung from the gibbet the second the judge banged the gavel.

My overriding thought through all of this charade was simply, obviously, I cannot share this glee. I do not support the death penalty. It misses the point, that if it’s a crime to take a human life, taking another doesn’t establish parity. It diminishes our humanity, whatever we view as humanity, if we consider ourselves special enough to make laws sanctifying human life by prohibiting the taking of it and then have the taking of a human life as the sanction for doing so. It does not serve justice, it only emphasises our chimpish viciousness.

At least Blair, when harried, admitted he didn’t think SH should die... But getting up last Monday to the press reports – including the Metro, with its big picture of a noose on the front page, I fucking ask you, exercising the bounds of taste and engaging in some incomprehensible and irrelevant collective exorcism of a ghost of a monster people do not believe in, a monster which has perhaps always just been an abstract to we of the west far away from Abu Ghraib [a Saddamite stronghold of nastiness and butcher’s hooks before the Americans moved in and got into the Overlook Hotel styled bad juju]… made me feel proud to be part of the greatest civilisation the world has ever known. We swept out the ashes with smug grins.

By last Wednesday, it was chip wrappers, today as I post this, it’s been superseded with more casualties on all sides in Iraq, deaths in Gaza, Israel, Sudan, you name it, and it’s all a bit shit, people getting interrupted for no good reason other than we can’t get it together enough to enjoy the sheer stroke of luck that fetched us up here, 93 million miles from the sun, in a prime spot for looking into the cosmos and going ooh, ah, wasn’t that a lovely rocket? Piss.

Yesterday, TheLondonPaper [shit freebie rag with the ad-line 'We live London'... they not like prepositions, too, presumably...] had this intriguing headline:

What, like, in petri dishes? Test tubes? Those big tanks like in 'Star Wars II: Attack of The Clones'?

I don’t know about you, but I’m fucking worried.

I grew bored with the Nathan Barley aspects of the pic what was accompanying these burblings. Here's one that more accurately reflects my role in universal affairs - Mark from Battle of the Planets. Heh!

Other items: finally, a 'blog of note' that isn't total catpiss! And a similarly cartoon-buffered approach to reality:
http://adoptamicrobe.blogspot.com/