The sky is beginning to bruise...

It's one of those 'autumn is upon us' days.

The manager at work [slightly fous French gent] came into the office and remarked that it looks like the end of the world... rather oddly, I had, moments before, looked out of the window and wondered if I should expect strange beasts riding across the heavens. A none-more-black sky bulks over the heavy green of trees moping in the rain. A wildcat did howl...

A more suitable activity would be the consumption of toast in front of the Monday Matinée, a black & white number, perhaps involving Fred Astaire.

On which note, I found this antidote to meteorological gloom: 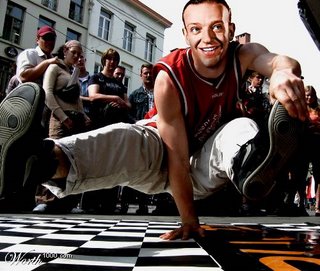 Fellow drones may recognise the following, or variants thereof:

Dear customer.
Achieve astounding results in bed with these products designed to make any man a winnerEnhanced male power and unlimited prowess with your girl The best products for the winning guys

Not what I want to read at 9.10 am when my palate is Kalaharified by a preceding evening in the pub. I want to be awash with tea, not manfat.

However. The tone of this type of mail is worryingly untidy - 'multiple explosions'! 'several times more semen volume'! The language obviously stems [heh] from the upended yoghurt pot school of pornography, in which visually arresting but unrealistically copious amounts of ejaculate is to be found besmearing faces, butocks, chests, feet... I am reminded of the punchline to one of my favourite jokes, 'Then I wipe my dick on the curtains and she hits the fucking roof.'

This email seems to encourage behaviour that only a launderette could condone. 'Achieve astounding results in bed', I ask you. Good news for detergent manufacturers!
Note to self: weave brilliant journalistic exposé of collusion between big Pharma and website spammers. Eat pie. Take paracetamol. Delete email.
according to... markwoff at 10:11 am 1 comment:

No, seriously, you fucking tube.

Tube being a slangese word for idiot, space cadet...

A slight return on an earlier piece about animal abuse [Horse Feathers].

Of Mice and Fuckwits

I mean, the first one is pretty deranged, but when you think about why we have so many animals cooped up in the first place, it leads one down a dietary/moral path that I discuss at greater length in the Horse Feathers post.

This second one is particularly unpleasant in concept. I mean, the other one wasn't posted online... 'youtube' is good for a lot of stuff, new progs, hard to get TV excerpts, mash-up video, genius home made films, ads, etc, etc. But... perhaps there needs to be a Dogme style manifesto [subject to the usual collective Wiki-tweaking, naturally] appended to the site that emphasises the illusory and distantiating nature of film, the importance of artistry and that just recording real stuff is not inherently valuable, no matter how grotesque. [Repeated attempts to find the mouse vid have proved elusive, so bear with me if my outrage in this regard is a response to a spoof...]

To return to the film theory bit... I refer to the 'plastic bag at the World Trade Centre' section in American Beauty, which is so very banal, not in the least bit as philosophically resonant as either the film-maker or meta-film maker thinks, and, to boot, emblematic of everything wrong with 'Western Culture' ['I saw some rubbish and just filmed it rather than cleaning up the mess.'] that it just makes me want to, I dunno, thwack poultry with rage. [Not a euphemism, although it would probably not be as soul-destroying to watch if I were to film me 'choking the chicken', as it were, and put it on youtube... well, a moot point.]

DO NOT INVOLVE THE BEASTS IN YOUR SELF-LOATHING!

At least with Jackass, Dirty Sanchez and the like it's people acting/catharting with themselves.
according to... markwoff at 12:30 pm 1 comment: 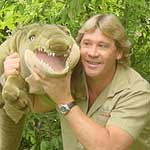 Boo! Steve Irwin - brilliant and mad as hats Australian naturalist - has died. A stingray got him, in what was clearly a contract killing funded by irritated aquatic reptiles.
Ah well - as he used to say, 'It's harsh, but that's nature's way.'
according to... markwoff at 7:50 am No comments:

I am quite exercised about this, and anyone who's seen the original version of the film will surely be in accord: whatever do the assorted makers, backers and promoters of the new version of The Wicker Man think they're doing?

Exhibit A:
Early trailer posters for the movie - UK versions - featuring the burning Wicker Man icon and the phrase 'Evil is waiting.' I stirred uncomfortably in my quotidien wandering.

In short: No.
At length: The Wicker Man is an intriguing meditation on the antagonism of beliefs, the conflict of different cultural and spiritual methods and practices and how one man's truth is another's fairy tale, or comparator, if you want a more scientific sounding word, and a word used in the film by the schoolteacher. It reveals an 'ideological abyss', as the wordy post-grads at Metaphilm suggest. It's simply a great movie, one that handles enduring themes and questions with a mixture of amateurishness, enthusiasm, good consideration and a conviction in the absence of answers, merely an acknowledgment of continuum with/without humans. And the soundtrack's great as well.

What it certainly doesn't do is make your mind up for you as to where you should place the acts of the actors on the moral swing-o-meter. Unless the remakers have just abandoned their film and the posters are a caveat, in which case 'Pointless remake' would be a better phrase for the posters than 'Evil'... Wikipedia's entry on the film: The white eyed child on the US poster signifies what exactly? [pick a reading, codified indoctrino-zombie girl, I shudder to think, it's so tedious] Apparently, making the leader of the cult a woman gives the film a 'feminist slant', and look at this nonsense: "Cage's character is not a virgin like the protagonist from the original film, as it was thought that the idea of an adult virgin in modern American society was too farfetched. Instead, Cage's character has an allergy to bees and has to deal with attacks by killer bees." Delicious. 'Evil', for fuck's sake. Neil LaBute probably believes in 'Post-feminism' as well, the film-tampering wanker. Gah, I say, gah!
according to... markwoff at 8:46 am 2 comments: