Having fallen off the wagon then my bike last night, my self-loathing and sore jaw is mitigated somewhat by the illustrious company I keep.

You're drunk. Step away from the vehicle. That includes bikes, you gash-chinned lush. It's unseemly.

Rain on the way, at last. London swelters, the parks are like scrubby deserts with trees and little oases of flowers, which it is permitted to water. No wonder there's wild-eyed crazed with thirst bunches of hydrophobes lurching about the streets. Times are tense. There's no need to amplify.
according to... markwoff at 1:56 am 1 comment:

First off, sorry about the fonts in the previous post. It was supposed to be a moderate level rant, not ALL SHOUTING from about half way. Blogspot not doing what I wanted: as in typo/ blography, so in global human interaction. Ho hum.

So: Last few days, there was a flurry in the sports pages over a jockey, Paul O'Neill, who was thrown by his apparently troublesome horse, CityAffair, after a race [at the start of which he [O'Neill] was reprimanded for whip use]. The jockey responded by appearing to headbutt the horse. He got caught on camera, stewards' enquiry, apologia, possible ban, etc.

There's this undertow of humour to the episode that's irresistible. I mean, jockeys - they're not big lads and lasses. And there he is, O'Neill perhaps thinking 'Stitch that, you awkward bugger' and dropping the nut on City Affair. City whickers menacingly. '"Whoa" yourself, little fella! Take it easy! You were hitting my arse with a stick! DO YOU WANT SOME? I'LL KILL HIM! I'LL KILL HIM!' and two other horses pile in, a hoof round each foreleg, pulling him back. 'Leave it, Citz - he's not worth it,' a warning shoe held up to keep away the furious little fellow, hopping with rage in his dinky, sparkly costume, a cross red-faced pixie shaking his fist. Two mounted police arrive and one of the horses says 'Evening all, what's going on here then?'...

Et cetera. I don't draw so well, but if I saw that animated I'd about piss myself laughing, proper wiping away of tears. Humans can be so preposterous such a lot of the time. And herewith the proof: The news from the RSPCA is that actually, no, we are being proper bastards to the animals, with a sizeable increase in deliberate, or at least careless, cruelty to animals, by people. [I find it hard to talk about 'animal cruelty' without thinking of the time I watched this cat I knew take two hours to play with, kill and eat a rabbit - one Easter Sunday, no, really! - and dolphins are psychos, and killer whales with their seals and so on and so on... Plus I do eat some animals... Hmmm... ]

Anyway, abuse, cruelty, the wide catalogue of mistreatment meted out by humans on, well, everying else... not feeding animals, keeping them locked up, using violence on them, and this includes a headbutt of a racehorse... Yes, yes - it's a ludicrous scenario in some ways, comical, but actually, there's the wee guy in a prominent sporting role with beasts, resorting to violence on the beasts, the daft sod. It highlights the wider issue, I suppose.

Also just been at an Old Blue Mark Thomas reading/interaction, interesting and wordy, for his new book, As used on the famous Nelson Mandela, interesting and wordy, about the arms trade, arms traders and accountability, weapons development... [Taser firing land mines?! No, really, and go here for the excellent suggestion that these are designed to 'protect non-combatants'...] Couple that to the RSPCA horse's mouth and away we go again on the aversive reactionary gallop from homo sapiens's unpleasantnesses, Swiftly does it. The horror of self and community generated by the continuing amplification of all narratives, shrinking globe and so on and on.

So, excuse me, please, for a quick moment, while I sneak another peek through the Cartoon Network/Norman Thelwell filter at O'Neill windmilling his arms, flailing blows, connecting only with air as City Affair holds him at leg's length, a hoof planted derisively in the middle of the jockey's hat, pushing the peak down over his face and hooting with near helpless horsey laughter, tears springing from the eyes.
according to... markwoff at 10:17 pm No comments:

People of Earth: GIVE IT A FUCKING REST.

I was going to write a well-reasoned critique, all balanced historical research and culturally sensitive theory in conjunction with neatly phrased rhetoric and insightful commentary.

PUT THE FUCKING ROCKS DOWN FOR A MINUTE!

AND YOU! GIVING THEM THE ROCKS AND GOING 'WHAT?' YES, YOU! STOPPIT!

Thousands of years on the planet as a species and still fucking trying to kill each other.
Is that it? Swinging jawbones at our age? WE ARE RULERS OF THE WORLD.

It won't get any more overlordy than this - indeed, it's pretty much downhill from here, unless we start developing gills or spacewings presto pissing pronto.

Now can we all just GET SOME SORT OF GRIP, for fuck's sake?

In what proved to be a tempestuous spat of considerable brevity, Cristiano Ronaldo of Portugal 'got Rooney sent off' during the 2006 World Cup. Rooney had extricated himself from two tenacious man-markers, and his final foot-setting was either intended for balance or to get the opponent in the nuts - perhaps a touch of both, just one of those things.

The initial tone of the media response, reflecting the group disappointment, seemed to be full of hate, bile and in The Sun in particular - according to one note samba band Peter Tatchell - homophobia. Yet it became clear, as the news emerged that the young lads had put their tempers behind them and swapped conciliatory texts, that there was, in the events and the reporting of the events, indeed, the whole of the World Cup tourney, an undercurrent - nay, roaring overcurrent - of enthusiastically encouraged, extremely gay, very dirty man love more torrid because of its occlusion than anything from the more overt works of Tom of Finland or Pat Califia.

A close reading of the Sun's "offending" page, from top to well-slicked bottom, ilustrates the hands of masters. The banner at the top in the print version was: 'line up to lash the rat', a phrase dripping with associations, allusions. A line-up, gang-bang, 'lash the rat' also appears to be a masturbation euphemism, which given the page's pin-up potential and its proximity to the peaks of page 3 was clearly an incitement to priapismic pulling. There is also the idea of corporal punishment for the pretty young boy who is considered dirty, verminous... lashing with its suggestion of knots, the British naval tradition - 'One in the eye' like Admiral Nelson, whose own 'column' towers over the centre of London - a tradition which, as Winston Churchill once remarked, was naught but 'Rum, sodomy and the lash'.

The phallic tones continue. The headline is underlined by a dart bigger than the actual dart board. Coupled with the military fetishes suggested in the preceding words, we are clearly embarking on a dangerous s&m fantasia with suggestions of uniformed men exacting humiliating revenge. Portugal's small population producing a team capable of beating the better paid and resourced English squad is an affront, the contemporary trope of disproportionate response dictates the unleashing of missiles to 'give Ronaldo one in the eye...' The dart clearly also represents the penis, with the chiselled oval of the flight suggesting both dynamism and a bulbous techno-scrotum of war... We are BETTER, BIGGER, HARDER than Portugal.

The 'Portuguese nancy boy' Ronaldo is the'world's biggest winker', a specifically English wordplay joke, which yet also suggests the other perennial News International favourite topic of cruising men identifying themselves with a brief flutter of the eyelid. Vada that omi-paloni. Ronaldo's eye is the bullseye, the 'bull's eye' connoting associated rural virility, Pamplonic danger... And again the collision, the coupling, of technology with organism. The target with its radiating filaments is overtly a stylised wire and rubber facsimile of the anus. For numerologists and da Vinci code acrostic enthusiasts: the numbers 9, 12,5,20,1,18 and 4, arrayed around the winker's head in a halo, add up to 69.

The trophy is the phallus in excelcis, like Pele's forearm holding a grapefruit. The reaction of the eventual winners, Italy, was supremely fetishistic, an admixture of lingam worship and Roman Catholic ritual, all stooping to kiss the cup, to caress, to lay hands upon it, to revere the trophy-cock. The bitter seeds of frustration crust on our lips. Here's what we could have won, says The Sun, wisting: It should have been us... 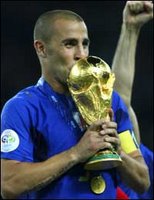 Tatchell just isn't trying hard enough!
according to... markwoff at 11:28 am No comments:

The Way We Live Today

So, I was surfing about trying to find the appropriate links for an article in the Metro [scum free paper made by the same Nazis that sneeze out Daily Mail etc]. Doesn't matter what, the moment's gone. Anyway, their 'latest metrobloggers' links led me on a sorry five minutes of lunch hour infuriation. Check out this moany cunt.

This blog is one of the principle reasons I shied away from joining in ['entering the blogosphere', dear sweet mysteries of the universe you fucking what?] for so long. It's just so boring, isn't it? 'Check my massively privileged life, and how stupid and frustrating everything else is by comparison. Those pesky beggars! Tennis on TV, what's that all about?! I smoke weed me...'

I try, I really do, to make my intemperate rants at least leavened by a sprinkling of self-awareness, even discomfort, that this is really the best response I can manage.

'DJ Quarry', what's your beef with 'northerners'? Who are, in any case, a semi-mythic breed invented by 'Londoners', fucking hateful also semi-mythical geographically sneery people who think the sun shines out of their arse-city. YOU LIVE IN A TOILET. And more to the point, it's a toilet with a miliion miles of antiquated plumbing. People come here for the money then fuck off home. Every single day. Because it does atrocious farts and then pushes your fucking head under the covers.

Furthermore, lads mags should be the subject of legislation, because they're shit.
according to... markwoff at 1:12 pm 3 comments: