I have long anticipated that a musician would just give away entire product online, now here it is: North London underachievers The Crimea release a free album, speculating that the increase in publicity and fanbase will lead to more gigs, merchandise, appearances, etc. Worked for Gnarls Barkley, obviously...

Although 'Lottery Winners on Acid' got pretty much constant rotation round our way when it came out, this latest move may see them fall on their arses [what if everyone hears it and goes 'yeah?' not 'yeah!'... plus just, like, giving stuff away like, well, lottery winners on acid - pinkos!] but for now, let us appreciate the paradigm shift going forward proactively. Onwards, onwards - O the wild charge they made!
according to... markwoff at 1:42 pm 1 comment:

Here is the theme music to an imaginary TV show from the 1980s. Along the lines of 'Knight Rider', 'Airwolf', 'Street Hawk' etc... I always envisaged a 'super boat' series, only to be thwarted by some feeble Hulk Hogan vehicle.[HAHA! 'vehicle...']

The original Fruity Loops [primitive sequencing tool used by primitive sequencing tools, version 3 when I was writing this stuff, now up to version 7.0.2 in Beta - all aboard the loopin express!] sketch developed from about three failed techno songs, which resulted in the working title of 'Large Kraftsleisses in Oban'... perhaps it's best not to even wonder.

Anyway, I decided in the end to call it the semi-ambiguous 'Theme from Road Fox', which clearly incorporates elements of 'Firefox' [as in the book about a Russian plane, nicked by Clint Eastwood in the film, not the wonderful window on the web manfacturers, although both have their charms], and which might refer to a tech-spec device that, say, Kylie Minogue, clad in strictly plot-necessary black lycra/leather kit - ['Unzip me.'] might play the controller of. In fact, that 'unzip' reference now has digital meanings also, so why not have a cartoon with Kylie doing the voice where she's a virtual crime [as opposed to street] fighter or something? Zooming along the information superhighway? When I crack computer animation, I'll melt your eyes. Melt 'em, I tells ya!

sometimes you have to go backwards to go forwards

Having started, deleted and restarted this post about fifteen times, swithering between manifesto, apologia, rant and explanatory head notes, I decided instead to just say 'oh bondage, up yours!'. More news on exciting produkty directly, but now... I present the first in a [hopfeully increasingly frequent] diversions into non-epistolary expression plundered from the vaults at Chateau Wolfenstein... above.
according to... markwoff at 11:59 am No comments:

Luckily I get to read and mess about with text for a living. Today one of the transcripts contained this:

"In the broader geopolitical area, diversity is critical and it is interesting to observe the situation in the Netherlands , where they are looking at the storage of massive amounts of gas through the purchase of Norwegian Troll gas."

Pass the sprouts, Lars! IT'S FOR THE GOOD OF THE PLANET. 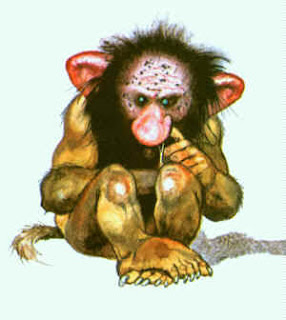 Labels: sometimes a flatulent troll is a good thing

Regular readers of this blah will perhaps be wondering where my scintillating chat has gone. There has been little to exercise me. I grow disillusioned with the form. It's been sunny. Whatever. Here's a picture of a lovely horse.