That 'bit of a mouthful' joke in full Kurbanguly Berdymukhamedov could be the next president of Turkmenistan by monday. He's a former dentist... the juxtaposition of his name and prior career are keeping me chuckling this afternoon as I prepare to celebrate my birthday.

Kurbs update: He is now the President of Turkmenistan.

And now, some corn for poppin' 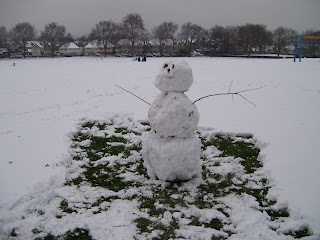 We knew in advance that there would be snow. It's a regional pastime, making a big deal out of not- very- extraodinary weather. One million Londoners apparently unable to make it into work due to an overnight blizzard of munchkin proportions - Swedish and Finnish friends laughing down the phone... we did our part here in the tundral wastes of SE4. A quick trip to Hilly Fields before breakfast yielded a mighty fine snowman...

My later plans, including an ambitious Greenwich meridian-aligned series of Easter Island-styled heads, only snowmen, ranged across the slopes, would come to nought as the snow melted and what we assume was kids going to the adjacent school destroyed Frosty in a snow blind kung fu rage...

If you think this theorised adolescent malevolence a touch fanciful, look in the background of these photos - taken earlier in the day - for an icy narrative of stalking, implacable, chilling fate - played out in the misleadingly pristine snowy surrounds - 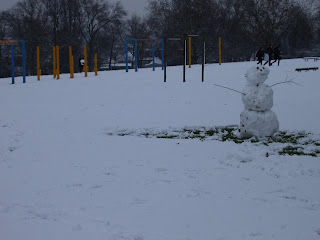 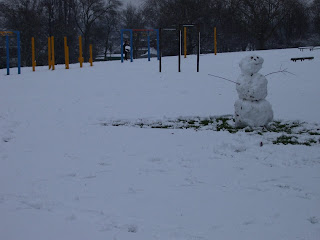 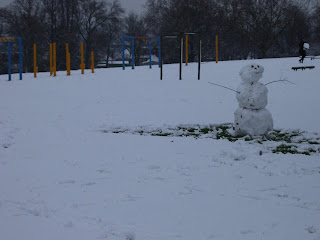 Today is 'Groundhog Day', both in the 'here we are at work again, let it end, let it end! like in the film starring Bill Murray' sense, and in the actual-festival-in-America sense.

Proving that Americans can do whimsy as well as the next anthropomorphed rodent, the massy marmoset Punxsutawney Phil emerged - live via webcam! - from the burrow at Gobbler's Knob - NO, REALLY - in his official capacity as Prognosticator of Prognosticators to project an early spring, (which might be due to global warming, but the President of the Inner Circle was being loose with the translation from Groundhoguese to avoid controversy with the 15,000-odd strong crowd that had turned up). Loud cheers and feasting commenced. And rightly so, given that it is only the 14th early spring announced in 111 recorded predictions.

Phil, 112, noted it had been 'a good gig', and promises to be back in the summer with his new game show 'How Much Wood Can You Chuck?'

Depends on where you're standing, obviously

Shell oil group have announced profits of £13billion, or $25billion.

That's THIRTEEN BILLION POUNDS, a 13 with nine zeroes after it if you're on the short scale.

On my current salary, I would have to work for 520,000 years to see this many zeroes in my 'paid in' column.

If I were a favela dweller on "less than a dollar a day" [see also this study], it'd be, well, about 68 million years.

If I actually worked on a pipeline in Nigeria, I might not live that long.

"Chief exceutive Jeroen Van Der Veer described this as 'good.' "
according to... markwoff at 10:49 am No comments: