A Passion for Chocolate

Sometimes it's just too easy. The magic of RSS means you switch on the PC to this kind of item, about a life size chocolate sculpture of Jesus. 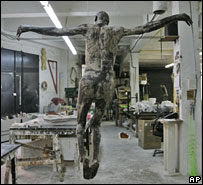 Fantastic. But the predictable moaning from the Catholic Church in America fails to capitalise on what is surely the most obvious potential recruitment bonanza they've had in years. Surely people will flock to join the flock when they hear what's on offer.

IT'S WHAT THE PEOPLE WANT. We already trough too much chocolate this time year anyway, we might as well invest it with some connection to the divine.

Some more of a connection, then.

Update: They decided against it. Obviously.
according to... markwoff at 10:23 am 3 comments:

Sort of free at last

This morning's news of the brand new £5.3 million gorilla enclosure at London Zoo was deeply affecting. Some simian sympathies must have stirred inside - this photo of chief primate Bobby: 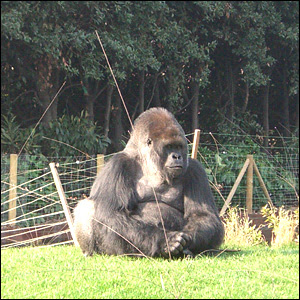 and the caption 'It is the first time Bobby, the male in the group, has seen the sky without bars since he was captured as a baby in Guinea.'... had me welling up.

I suspect your blogger has been reading too much Dante. 'But he gets heated rocks and everything!' Well, you can't see the moat and electric fence in this photo, obviously, and he is still in a zoo... But you get the idea.

Interesting other occurrence of Great Apes in the news today: Should other mammals be given human rights, as they share our DNA to a very close degree? Well... maybe we could just stop drilling into marmosets' heads and hooking dolphins by the eye, rather than feel the need to draw up a charter to formally regulate our behaviour.
according to... markwoff at 1:30 pm No comments:

Labels: Bobby the Gorilla, Dante, room of one's own [with a view]

The Sole of Destiny

I recall I was nattering to m'colleague Andy - as to be found at The Breezy Call blog, see the list on the left - about nice this 'n nice that and distressing t'other... Matters turned to accidents of geography, where animals' paths cross to devastating effect. (Forgive the voiceover tone of that last sentence. I've been engrossed in the BBC's excellent documentary number Planet Earth, Attenborough's foray into the natural world - see it while it lasts! Pretty soon it'll be aerial shots of Polar bears swimming in ironic Busby Berkeley circles through rapidly melting chunks of icecap - and I wanted to set an appropriate tone of reverential awe and fatalistic acceptance...)
Andy related that he 'terminated a woodmouse', although without any prejudice, let alone extreme.
'I was walking along a path not far from my house when it panicked and scurried out from its safe hiding place on the side of the path and under my irrevocably descending right boot. I have fairly small feet, so it is hard not to see Darwin's hand in its self-deselecting rush to the only certainly-deadly place for miles around. Its demise and my role in it left me in a very morbid and philosophical mood for much of the rest of the walk, and I wasn't even smoking anything which might encourage such a profound state of mind.'

I had to commiserate. I'm lucky in that my interfaces with rodents extend as far as ignored humane mouse traps with bits of cheese in - or, more frequently, crowbarred open humane mouse traps with no bits of cheese in and a thank you note in scratchy mouse hieroglyphs [three fat mice, one with a quill, one doing a thumbs up [somehow], one rubbing its tum, a block of cheese with a tick next to it.] However, I've crushed many a snail in my cack-footed blundering about, which is always unfortunate, not least for the flattened gastropod peeling itself off the paving slab. Not so much a run-in as a walk-in (which is worse, it's in slow motion and all the more agonising. N o o o o o o o o o o o o...).

All things considered - unless you're considering becoming a Jainist monk - best to ask not for who the foot falls... it is for this reason that astronomers are a much-undervalued section of the scientific community, particularly meteor watchers.
according to... markwoff at 10:25 am 2 comments:

To the Astoria in Charing Cross Road, London Village (a week ago this Thursday) to see LCD Soundsystem, as previewed breathlessly in the last post. A charmingly scuffed venue, the sort of thing ripe for getting bought by Carling and turned into a boozeodrome... and perhaps ruined, which would still be an improvement on just getting shut and replaced with more retail outlets - which you can find out about here...

So that's the venue... inside, we were felt up by security before finally getting in to the hall in a state of great anticipation for the gig. First, though, we had to endure Prinzhorn Dance School. They were like an early pre-song version of Talking Heads, all Joy Division colour scheme with occasional leggy and knock-kneed lass bass player shouting... super-earnest mainly grooveless songs that dragged themselves forward in the mud as comments sniped in from all around our party: 'Is this Christopher Eccleston's serious music side-project?' 'I look forward to the album with Eno,' 'Shall I shout 'Play Love will tear us apart'?' 'Several days later...' A friend mimes the singer hanging himself as I mime putting on 'The Idiot'. Interminable.

Mercifully, LCD Soundsystem were superb. They started with a three week frug-out version of 'Us v them', and then Daft Punk were playing... the unison Blockbuster-esque howls on 'North American Scum' so startling and intense... you forget sometimes, observed one of the circle who had not seen them previously, listening to the albums, that this is a band, an incredible band, in the six people grooving brilliantly on stage sense. The crowd was full of excitement. J disappeared forward to join the milling at the front and reemerged afterwards flushed and actually speechless with the experience. She signed 'a.ma.zing' while pointing distractedly about.

This was a gig which relit my fire, eyes on the band as I squeezed back from the bar through the crowd which was grumpily shoehorned in as 'Tribulations' rocked aptly in the foreground. Some knots of people irritably calling for 'losing my edge', but times move on - one teasing blast of the drum sample elicited a gasp of excited recognition, but the keyboard player quickly stabbed off the machine with a finger. A dynamic and forward looking band, for all the references to bygone musical mileposts the hip priests of Pitchfork can delineate... first encore 'Someone great' was already in my top tunes of the year CD mix, the live version can go on the bonus disk. Fanzines were plotted, band adverts put up: we heart LCD Soundsystem.

'Saved, for the moment.' 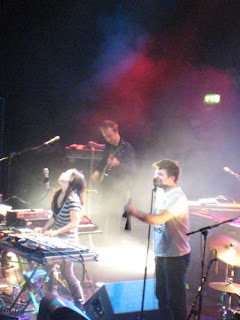 More cowbell!
(Photo by crispin hearn, pinched off the LCD website)
according to... markwoff at 9:02 pm 1 comment:

But! LCD Soundsystem at the Astoria tonight... 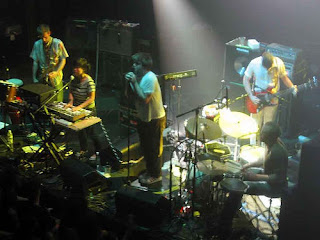